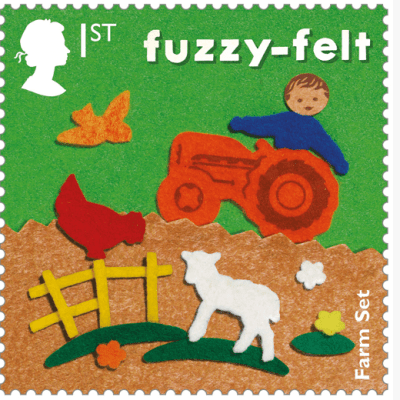 Fuzzy-Felt has been commemorated with a special stamp from the Royal Mail, which is celebrating some of the most iconic and much-loved British toys from the last 100 years.

Fuzzy-Felt was amongst some of the classic toys chosen, as it evokes feelings of nostalgia across generations and is still hugely popular today.

Created in 1950 by Lois Allan, Fuzzy-Felt has been a childhood favourite and has captured the imagination of young minds for over 65 years by creating colourful scenes using pre-cut felt shapes that can stick on a flocked backing board.

Perhaps less well known is the fact that the toy’s origins lie in the production of tanks during the Second World War. The tanks’ gaskets were made of felt and the manufacturing process created small offcuts which the factory workers’ children would play with.

The original felt pieces were plain silhouettes and later evolved into more detailed printed shapes on themes such as farm animals and dinosaurs.

The stamps are available at 7,000 post offices across the UK as well as the Royal Mail’s website.

This website uses cookies to improve your experience while you navigate through the website. Out of these, the cookies that are categorized as necessary are stored on your browser as they are essential for the working of basic functionalities of the website. We also use third-party cookies that help us analyze and understand how you use this website. These cookies will be stored in your browser only with your consent. You also have the option to opt-out of these cookies. But opting out of some of these cookies may affect your browsing experience.
Necessary Always Enabled

Any cookies that may not be particularly necessary for the website to function and is used specifically to collect user personal data via analytics, ads, other embedded contents are termed as non-necessary cookies. It is mandatory to procure user consent prior to running these cookies on your website.