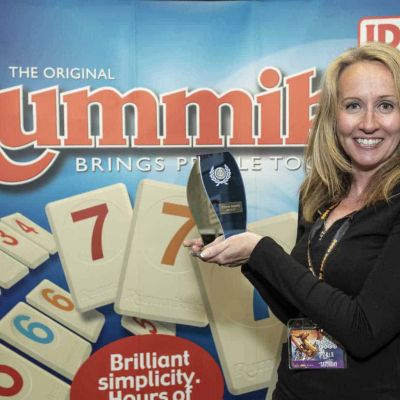 Liz Rumble, an Executive Assistant at an IT company in Maidenhead, was one of 26 contenders that competed in the tournament at the UK Games Expo at the NEC Birmingham on 2nd June.

The Rummikub Championship Tournament sees opponents compete in rounds of the family-favourite game and each player must place all the tiles from their rack onto the table as part of a ‘run’ or ‘group’. The aim of the game is to be the first to clear their rack of all their tiles and shout ‘Rummikub’. Players must use strategy and sharp moves to outwit opponents.

Liz was awarded the winning trophy after winning 15 games over the course of the day and will fly out to Jerusalem with her husband to play for the title of World Champion on 9-12 November. She will compete against individual winners from other European countries including Belgium, France, Czech Republic, Italy and Holland as well as a winner from the USA.

Liz said: “I still can’t believe I won! I’ve been playing Rummikub since I was a child and only registered for the tournament as something fun to do – I didn’t think for a second that I would win. I think my husband secretly wanted me to be knocked out early rather than later so he wouldn’t have to hang around all day but when I started to get through more and more rounds he became quite excited too!

I was shocked when I was announced as the winner – what was simply meant to be a bit of fun will now see me compete in Israel! I’m determined now to get in as much practice as possible and make the most of such a great opportunity. My friends and family have been really supportive and now keep coming over to play and I’ve also started teaching my two girls. I’m going to really go for it and hopefully do the UK proud this November!”

If you’d like to keep up the latest Rummikub news and competitions, make sure you’re following the official Facebook page.

This website uses cookies to improve your experience while you navigate through the website. Out of these, the cookies that are categorized as necessary are stored on your browser as they are essential for the working of basic functionalities of the website. We also use third-party cookies that help us analyze and understand how you use this website. These cookies will be stored in your browser only with your consent. You also have the option to opt-out of these cookies. But opting out of some of these cookies may affect your browsing experience.
Necessary Always Enabled

Any cookies that may not be particularly necessary for the website to function and is used specifically to collect user personal data via analytics, ads, other embedded contents are termed as non-necessary cookies. It is mandatory to procure user consent prior to running these cookies on your website.